I'm a winner!!
I commented on an post over at TrekMovie and won the In Search Of... boxed set! Click here to read about the prize and see my winning comment: Review: In Search Of… The Complete Collection & Your Chance to Win! [UPDATED: Winners announced for In Search of... box set!]

My prize arrived the very next day after the announcement of the winners. Although the list price of the set is $149.99, it is available on Amazon.com for $117.08.

The seven seasons set is attractively packaged in a fliptop box. Let's open it up. 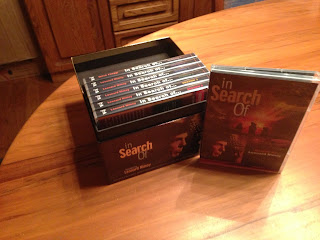 I began at the beginning: Season One, Disc One
The theme music VERY1970s.
There are 4 episodes on the disc. I click on the first episode, "Other Voices." The mystery is whether plants communicate and have feelings.

Plants have feelings. Marcel Vogel, a research chemist San Jose, CA is the first person we are introduced to. He is having children try to feel the plants' energy by hovering their hands above the plants. Vogel was known for his mainstream scientific work as well as some fringe science theories. He is best known for designing the Vogel Crystal Cut, which purportedly focuses the "Universal Life Force." Learn more here: Wikipedia Vogel Entry  and here: Legacy of Marcel Vogel

Next we see Nimoy in his signature turtleneck. I swear that's all he wore in the 70s. Turtlenecks. Did he get a lot of hickies? I digress...back to the DVD.

We are now at the Denver Botanical Garden. Music is being played for the plants.  Musician/Biologist Dorothy Retallack experimented with many different types of plants and music. While keeping water and light levels equal, she played hard rock in one chamber, soft, soothing music in another. Plants leaned toward speaker in the chamber where soothing music was played, but the hard rock plants shrank away & died. Time lapse photography over several days showed this dramatically.  However, my googling skills have turned up several experiments that got the opposite results, and much discussion about the many variables in these experiments. After reading several web pages devoted to the topic, I might conclude that music, or sound in general, may be an energy source that plants may be attracted to. Here's a good site that details her experiments more than the show did: Dorothy Retallack's Positive Music Experiments

Kendal Johnson and his  Kirlian photography is up next. He takes photographs of leaves exposed to electrical energy. My first impression is that he looks like a hippie with his shirt embroidered with flowers and laid back attitude. He is explaining photographing energy in the air. Yes, photographing the AIR. He says he asks people who have a "green thumb" to hold their hand over a wilted leaf and the photograph glows more. These people have more glow in Kirlian photographs of their fingers.  I looked up Kirlian photography and I just don't see how this proves anything about plants communicating. I think the photographs simply depict coronal discharge, and variations can be attributed to humidity levels around the object and perhaps chemical variances. I mean, they are sending voltage through the subjects, right? Here are some links if you're curious:
Wikipedia entry on Kirlian Photography
How Does Kirlian Photography Work?

The final wacko, um, I mean researcher in this episode is Cleve Baxter, polygraph expert for CIA who uses polygraphs to study plants. He cuts his own hand, to see if he gets a response from the plant. WTF? The experiment fails..perhaps he's performed it too many times? He tries again with an assistant. He cuts her hand (shouldn't he have gotten a fresh plant instead of a fresh victim?)  Oh wow, the plant reacts to her as he slices her hand! He concludes that it is a reaction to her apprehension and pain, pointing out the spike on the graph at the point when he is about to cut her.

So the conclusions are that plants and even bacteria can react to something that is happening to other life forms nearby.

Nimoy asks, "Did you ever wake up with a feeling that something happened to someone you know? ...Plants may have carried the message to you." This reminds me of the blossoms in Narnia telling the Princes that Aslan was dead. He then says that plants can understand us and communicate, but for the time being we can only listen to them with our machines. One day those machines may be unnecessary.

Because I'm a curious person, I watched Episode 2 immediately after being astounded by my newly acquired knowledge that my plants are frustrated to no end in trying to talk to me. I'm so distraught, I'll just present my notes on the episode in bullet form.


Disclaimer over credits: this series presents information based in part on theory and conjecture. The producers purpose is to suggest some possible explanation, but not necessarily the only ones to the mysteries we will examine.

Here is the Wikipedia entry on the site: http://en.wikipedia.org/wiki/America's_Stonehenge
I'm skeptical of the explanation given on the show. Especially the sensationalism of the sacrificial stone.
I like this explanation from the above link: "Artifacts found on the site lead archaeologists to the conclusion that the stones were actually assembled for a variety of reasons by local farmers in the 18th and 19th centuries. For example, a much-discussed "sacrificial stone" which contains grooves that some say channeled blood closely resembles "lye-leaching stones" found on many old farms that were used to extract lye from wood ashes, the first step in the manufacture of soap."

After watching the first two episodes, I am hypothesizing that most of the topics presented in the series are sensationalized and after 25 years of further study many of the theories presented have probably been disputed. It was probably a riveting show in the 1970s, before the instant-answers and collective knowledge of the internet, and I'm sure it sparked quite a bit of interest and imagination in its viewers. I can see how it would hold a nostalgic place in original viewers' hearts.
Posted by starfleetmom at 10:37 PM