A Whale of a Tale

It's difficult to take pictures, take videos, take notes, and keep your breakfast down, but I did it!

Yesterday, I went on the Stephen Birch Aquarium Whale Watching Cruise with my friend Kristie and our daughters, who happen to be best friends. Despite six- to eight-foot swells, no one lost their breakfast, and everyone on board had lots to see.

We checked in at Flagship Cruises on Harbor Drive in San Diego at 9:15 a.m. Our tickets were exchanged for boarding passes, our picture was taken, and we boarded the Marietta where we were greeted by Amanda, the Birch Aquarium Naturalist, and a Birch Volunteer named Don.
As Captain Wil was preparing to set out, he warned us that the calm, flat waters of the bay were NOT the same as those of the Pacific Ocean. We were to expect sic-to eight-foot swells at 12 second intervals, and if we had seasick medicine, now was the time to take it. We were instructed on the location of life vests and seasick bags. I was already wearing a scopolomine patch (I can't go NEAR a boat without one), but Kristie thought a trip to the snack bar to purchase some Dramamine seemed like a good idea. She took her dose, and gave each girl a dose and we were on our way.

It took about 45 minutes to exit San Diego Bay, so Amanda spent that time giving us a tour of the surroundings. We learned of the tool-shaped buildings in the San Diego skyline (Phillips and flathead screwdrivers, Allen wrenches, and such), the local Naval buildings and a bit of history. Before we were completely out of the bay we saw a small pod of Bottlenose Dolphins and a couple of California Sea Lions. The bay was home to scores of birds, too: Surf Scoters, Black Scoters, Double-crested and Brandt's Cormorants, Western and Heerman's Gulls, CA Brown Pelicans and an Eared Grebe.

Once we cleared the tip of Point Loma, the face of the sea changed dramatically, and the temperature dropped, too. At first, the girls thought the rocking and dipping was as fun as a ride on a roller coaster, but after a while, that darn Dramamine had them both in a stupor. That is precisely why I don't take it.

Soon we spotted a pair of blows in the distance and our Captain, while keeping a safe distance from the behemoths, began our pursuit. Amanda advised us to turn off our cell phones, as we were so close to Mexico that we might be hit with roaming charges if calls or texts came in. We followed the pair of bachelor Gray Whales southward for about an hour. Along the way we encountered a pod of Common Dolphins feeding together with several California Sea Lions and flocks of gulls, pelicans and shearwaters. We were treated to the two whales breaching three times. I was able to catch two of the breaches on my Flip video camera.


Amanda was very pleasant and informative. She taught us much about the natural history and migration of the Gray Whale. Females are about 45 feet long, about half the length of the Marietta. They mate in the shallow bays of Baja, Mexico, then swim about 12,000 miles to the cold, rich waters of Alaska where they feed and put on weight for their journey back to Mexico the following year to birth their calves. They fast during their migration, and eat very little while in the warm waters of Mexico, so when they reach Alaska they are very hungry.


Gray Whales are benthic feeders, meaning they scoop up mud and sediment from the sea floor and strain it through their baleen, swallowing the nutritious plankton, mollusks, crustaceans and small fish.

Gray Whale calves gulp down rich mother's milk 50 gallons at a time! The milk is 55% fat and helps the young whales gain about 50 pounds a day! Even I can't put on blubber that fast!

Traveling northward, we encountered another large pod of Common Dolphins. These playful cetaceans wowed the passengers with their bow-riding, and cameras were snapping furiously. Before long we were passing the tip of Point Loma again, and in calmer water. Sea lions lazed on directional buoys and docks, and we learned a bit more about our San Diego Naval Operations. 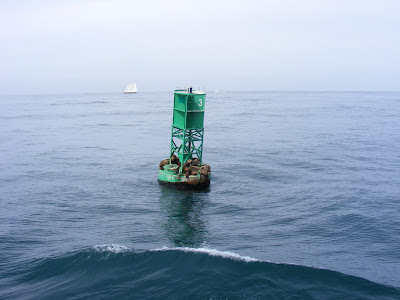 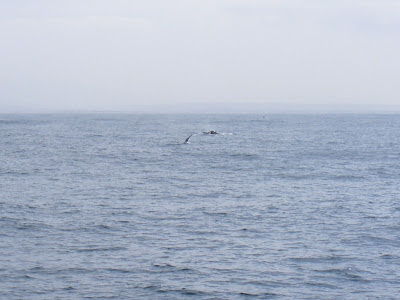 We saw where trained dolphins help the Navy by alerting them to anything that enters the bay that shouldn't be there. We saw the submarine servicing area, which had a sub inside. We saw the Aircraft Carrier Turnaraound area, and the Naval Oilers, which are huge refueling ships. We got great views of the Coronado Bridge and the USS Midway as we pulled into port just before 1:00.

Thank you Flagship and Birch for a great morning at sea!

Posted by starfleetmom at 4:09 PM 4 comments: