In the Trenches With Yellow Eyes

5 Jan 2013
Today it finally felt like summer! It got up to 28 degrees! After a hearty breakfast with our hosts, Anne and John, and their other guests from Germany, we set off for Dunedin. First stop was the southernmost Harley-Davidson shop in the world. If you know me, you know I hate motorcycles, so you maybe asking, "WHY?" The answer is, simply, because I am a good friend. ::wink:: my neighbors and my BFF are avid Hog enthusiasts and wanted t-shirts. I only hope after seeing the price tags that hey are still willing to pay me back!

Next we headed out to the end of the Otago Peninsula, where we had a tour reservation at Penguin Place. The road is insane! It is a narrow, winding road that literally hugs the bay. It was high tide and at times we were no farther than a meter from the edge of the water! To make things even more exciting, there were cyclists on the road, too, and a bike lane only part of the way. 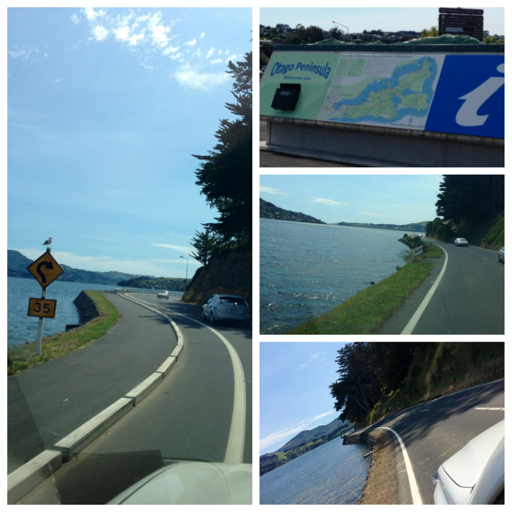 The Penguin Place was awesome! Here's their link for more info: http://www.penguinplace.co.nz

We began our tour with a short talk about the location, organization and the Natural history of the Yellow-eyed Penguin. They are the rarest penguins in the world, with a population totaling only about 4000 birds. There are colonies on several subantarctic islands and along the coast of New Zealand's South Island. The South Island population is about 700 and the number if birds using this particular colony is about 40.
Yellow-eyed Penguins are not social birds like the Blue Penguins. They are solitary and the pairs mate and nest in seclusion in the shady underbrush above beaches, up to 1 km from the water. Natural predators are sharks, leopard seals and sea lions. On land, introduced mammals including dogs, cats, stoats, and weasels all mean death to eggs and chicks.
The birds here have chicks now. Some are still in the guarding phase, with one parent babysitting while the other fishes. Others are now old enough to leave alone while both parents fish.
The Penguin Place reserve is on private property, on a sheep station! The farmer realized he had penguins and set aside the beachside portion for their protection. He has since passed away, but his family carries on. There is no government funding, but there is government oversight. The reserve is run solely on revenue from tour charges.
After our short orientation, our guide drove us on a bus through the pastures and down to the Pacific side of the peninsula. The view overlooking the beach and adjacent penguin reserve was spectacular. We walked down a short trail to the viewing area.
There are a series of tunnels dug into the hillsides, covered for camouflage. At the end of the tunnels are hides where people can see the nests up close. We were instructed to keep our voices to a whisper and not stick out arms or cameras through the viewing holes. We were able to get within 2 meters of one bird with its chick!
There are nest boxes set up on the property for temporary use by the pairs until the trees and bushes they have planted grow big enough to provide the shade and privacy the birds require. Hundreds of saplings are dotted around the landscape with green plastic boxes protecting them from rabbits. 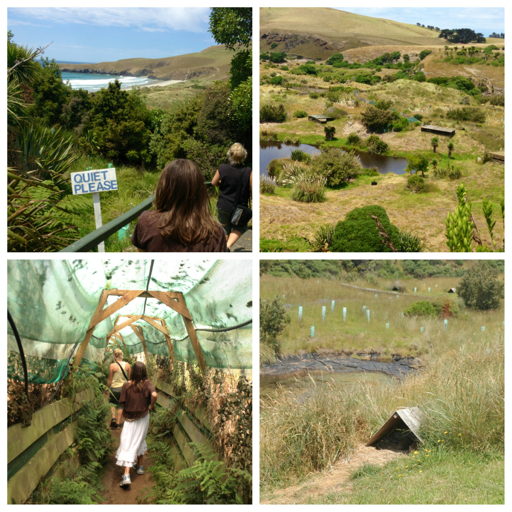 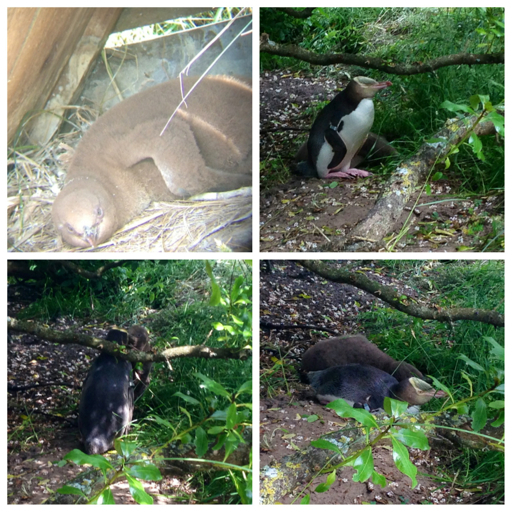 After spying on several penguins we headed up the trail to a beach overlook to scan for penguins coming ashore. We didn't see any, but there were dozens of fur seals hauled out on the sand. 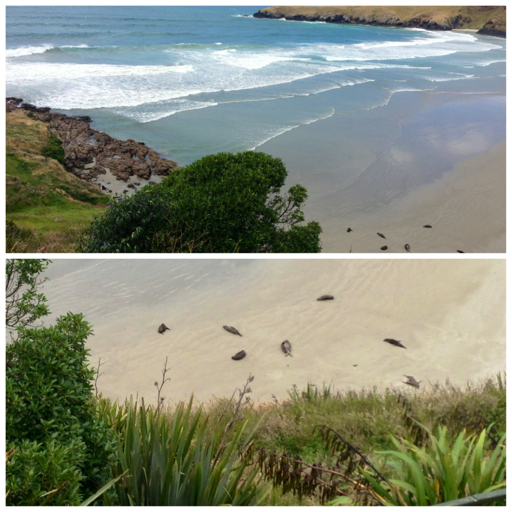 After we finished at Penguin Place, we drove a short way to the end of the Peninsula to the Royal Albatross Centre. There was a viewing platform overlooking some bluffs that were loaded with various cormorants and Red-billed Gulls, and fur seals on the rocks below. As a matter of fact, there were thousands of gulls all over the grounds and various stages of nesting. Treklet was dismayed to see several dead gulls on the ground, most of them juveniles. According to the Centre staff, they fight and kill each other! 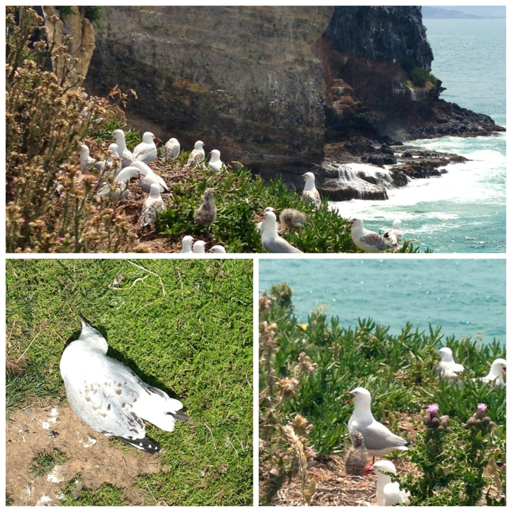 We didn't feel like paying $100 for a tour to see the albatross nests, so we just paid $10 to look at the gallery and took our chances at seeing an airborne albatross. The Centre is also at the site of the old Fort Taiaroa so the gallery had historical information, as well as interesting displays on the birds, conservation, and the biologists who studied them. This is the only "mainland" site that the albatrosses nest, every other colony being on remote subantarctic islands. We had lunch at the cafe inside and browsed gift shop. I am sad to say that we did not spy an albatross outside. :-( 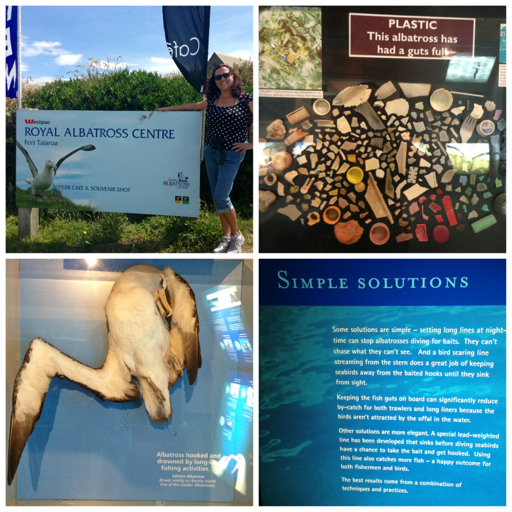 On the way back from Dunedin i saw Orokonui Ecosanctuary on the map, so we turned off and drove a few miles up a winding road. We soon arrived at the locked gate of the closed facility, but decided to stay and do some roadside birding because there was some native bush. We got nice looks at several Bellbirds, Tuis New Zealand Pigeons, Chaffinches, Greenfinches, Yellowhammers, and added Redpoll to our list. Heading back down I thought I saw so something on a large stump and made the Alien stop the car. I was right! It was a Little Owl! I don't know how I spied that from a moving car, but we all got good looks at it. How cool was that?!
We stopped for supper in Palmerston, bought a few bottles of Speights to go, and went back to the peaceful Glen Dendron Farmstay. It was a beautiful evening, and we enjoyed our beer outside while visiting with John and Ann. Ann made up some bottles for the orphan lambs and Treklet got to feed them and the alpacas. 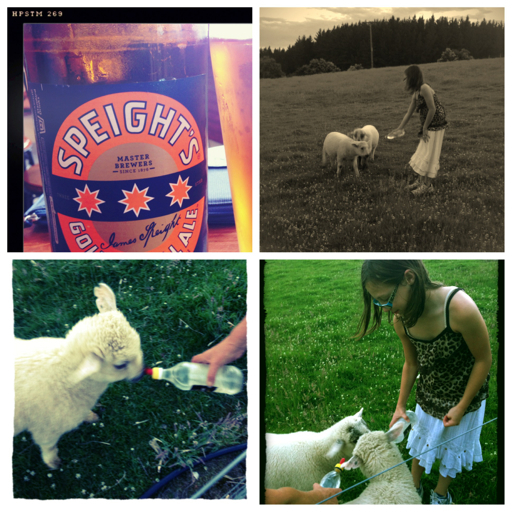 Posted by starfleetmom at 7:03 PM