The Legend of the Guardians 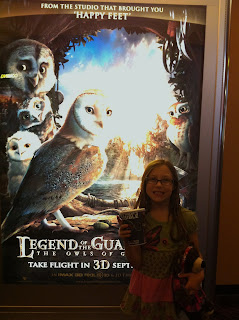 I had 2 IMAX passes and Treklet had a minimum day today, so we went to the movies. We saw The Legend of the Guardians: The Owls of Ga'Hoole. (doesn't that sound Klingon to you?)

The movie is visually beautiful. The owls, especially the Barn Owls, or Tytos (in the movie they are referred to by their genus name), looked real. I am a birder, and I know my owls. The perplexing thing about the movie was that all of the owl species were North American, but the setting of the movie was Australian, as were the character's accents. There was an echidna, huge Australian bats and a reference to Dingoes. Easily identifiable owls were Barn, Great Horned, Great Gray, Snowy, Elf, Whiskered Screech, Burrowing, Long-eared, Short-eared and Barred, all of which are found in North America. There may have been a Sooty or Masked owl from Australia represented, but I don't think so....fellow birders let me know what you ID if you see the movie!

Most people wouldn't notice the above discrepancy, but it distracted me. I'm a true nerd.

The Story:  The story begins with a happy Tyto Owl family comprised of Mom, Dad, 2 sons and a daughter and their nursemaid, a snake. Weird about the snake, I know, but I have to keep reminding myself this is fantasy. The brothers get their first branching lesson from Dad. One brother, Kludd, is prideful and jealous, and the other, Soren,  is a dreamer. The sister is very young, and not ready for branching yet. When Mom & dad go out hunting for the night, the two young brothers decide to go out and practice on their own.

They end up on the ground, defenseless, are attacked by a wild boar, then snatched up by the "Pure Ones" harvesters. They are taken prisoner by the evil Pure Ones who are Nazi-like in their Tyto superiority complex. Soren and his new friend, Gylfie, an Elf Owl are taken to be brainwashed into enslavement, while Kludd kowtows to the evil Nyra as he craves acceptance like a lonely kid joining a street gang.

Long story, short, Soren and Gylfie escape the concentration camp, befriend a comedic Burrowing Owl and his companion a Great Gray Owl, who coincidentally has caught the nanny snake for dinner. Together the five of them go in search of the Guardians who they hope will defeat the Pure Ones.

The movie has amazing visuals. The flight scenes in 3D through forests and over tumultuous water are beautiful. There is lots of peril, and extended battle scenes. The owls make use of warrior helmets and scythelike metal talon extensions, which they use to impale and slice their enemies. Therefore, I cannot recommend this movie for the youngest audience, but my eight year old Treklet enjoyed it very much.  I will add that Treklet is a bit of a nerd, and very bright and mature for her age. The PG rating is very much necessary.

The characters are well voiced, the scenery, flight and battle scenes are beautifully done, and the score is excellent, although at one point near the end  reminiscent of the Jurassic Park Theme.  I'm not sure non-birders will appreciate the attention to detail in the owls plumage, but I think everyone will appreciate the cleverly designed facial movements, realistic flight motion, and general beauty of the film.
Posted by starfleetmom at 6:16 PM