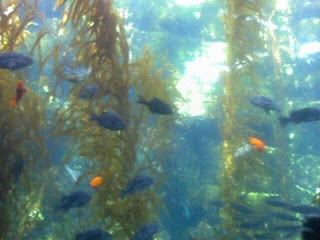 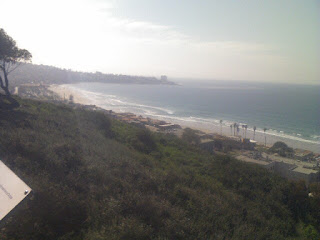 Treklet and I had a lovely day today! One of her favorite places to go is the Stephen Birch Aquarium in La Jolla. On the way there, we went to Einstein Bros. and had lunch. I had a BOGO coupon for Twisted Bagel Sandwich Combos. They were delicious ( we had turkey)! For $3 each we got a yummy sandwich, chips, a pickle and a drink.

The aquarium was fun. We got to the octopus and eel tanks at feeding time, and an aquarist was there to answer questions. Treklet loves making sketches and taking notes at the aquarium. They have some very nice interactive displays, which are quite educational, and we both enjoyed them. She spent $1.4o of her own money for an activity book, which she enjoyed in the car, and later tonight with her dad.

After our visit with the sea creatures, I decided it was too beautiful a day not to drive down the hill to the beach. We walked a bit on the sand barefoot, and ate a snack of leftover chips from lunch and drinks we brought from home. We were entertained by a couple of guys practicing really cool Frisbee tricks. I heard on the radio that the man who invented the Frisbee, Wlater Fredrick Morrison, died today, so that was like a little celebration of him.

There were about 15 paragliders over the cliffs to the north, and that was fun to see, too.

After our snack we headed back to Escondido. I had promised Treklet that if she were responsible with her chores and such I would take her to get her ears pierced for Valentine's Day. Well, today was the day! She looks so pretty in the sparkly flower earrings she chose. I hope they heal up better than the last time two years ago. We finally gave up on them and let them close up. Hopefully, now that she's a bit older, we won't have any problems. We're going to leave this pair of piercing earrings in until well after Easter, perhaps until school gets out.

We're planning a trip up to Ramona in the morning for the Hawkwatch. I hope to interest Treklet in birds, so that I can start up my old birding hobby again. I like fish, too, but birds are everywhere. We planned to do the hawkwatch last week, but we were rained out.
Posted by starfleetmom at 8:07 PM