Free samples that I signed up for in January have started to arrive. In the past week I've received a full size bar of Dove soap and a sampling of Always pantyliners with coupons.

I got a wonderful one-of-a-kind poster from my friends at Trekmovie.com. They had a contest on Twitter in celebration of Voyager's 15th anniversary. (see http://trekmovie.com/2010/01/22/voy15-the-science-of-star-trek-voyager/) The contest was to simply tweet what your favorite technology from Voyager was and why. Here is my winning answer:
@TrekMovie my fav voyager tech in EMH cuz he was dynamic/able to learn/grow & became integral part of crew esp. once he got mobile emitter.
Here is the description of the poster, sent to my from Kayla, the Science reporter for TrekMovie.com:

It's a poster, which was designed specifically for me by a friend of mine who works in the Mars Space Flight Facility, which is at Arizona State University, the campus where I work and go to school. We only printed four of these posters, so it is one of a kind!

The image on the poster is of Utopia Planitia, a vast lava plain on Mars as well as, in Star Trek lore, the location that is in geosynchronous orbit below the Utopia Planitia ship yards (where USS Voyager finished its construction). The image was taken by the THEMIS (THermal EMission Imaging System) camera, which is onboard the Mars Odyssey spacecraft currently in orbit around Mars. If you want to learn more about the photo, or themis, and where the photo was taken, all of that info is online. Go to:

The image number is V01993007. Type that in and you can get all kinds of cool data about the photo. The website: http://themis.asu.edu/ has more information about the THEMIS mission. You may have met my boyfriend, Andy Britton, at the Vegas con last year. He works at the Mars Space Flight Facility, and he helped me get your poster. If you're ever in Tempe, call me up, and I'll have Andy give you a tour of the facility. It's a really neat place, and there is a full scale MER rover in the front lobby.

I hope you enjoy the prize and that you know how special it is!

One more thing I forgot to mention about the poster. Because of the toner used to print it, it is a bit fragile. These posters tend to scratch easily, so be careful when handling it. I'd recommend getting a cheap frame for it if you can.


Pretty cool, right? So I took my 50% coupon that I got for signing up at Michaels.com and went frame hunting yesterday. Unfortunately, the poster is a weird size, so I had to get a much larger frame. I will try it later today and see if it will work. I don't want to have to pay for custom framing! Perhaps I can have it laminated instead. I must say, the poster is more than just the Mars photo...they added Trek info. and a Trek logo and Voyager! More info. on the cool Trek connection can be found here:

I'll post a pic of my framed poster whenever I get it figured out. 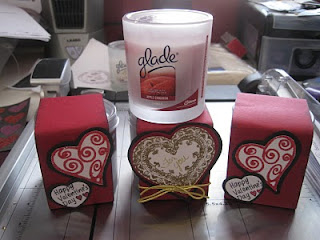 Last week there was an awesome deal on Glade Candles at Vons. The weekly circular had a special VonsClub coupon for 2/$4, limit 4. I combined it with a manufacturer's coupon for $3 off 2 and paid .50 each! I picked up another circular on my way out and went back the next day for 4 more.

I just thought I'd share what I did with some of those candles. I made Valentine gifts! I thought these would be cute for teachers, friends, whoever. Isn't nice to be able to share a gift without breaking your budget?
Posted by starfleetmom at 10:26 AM