It's two days til Christmas. It doesn't feel like Christmas at all. Kiwis don't get insane at this time of year like Americans do. Decorations are scant. The farm stay that we are at has a wreath on the door. That's it. There have been a few Christmas trees in town where we have eaten. I have heard some Christmas music playing in gift shops and cafes, but advertisements imploring people to part with their money to buy ridiculous amounts of merchandise do not exist.

It's summer here. Early summer, really. The temperature are measured in Celsius and produce is sold by the kilo. Gas is NZ$2.04 per litre which is about US$6.50 per gallon...So stop bitching about gas prices.

We're in Rotorua for three days. It's a tourist area, but even with that being said the prices are sky-high. The exchange rate is somewhere around .85 (NZ$1 = US$0.85). We've averaged about US$65 per meal this weekend for the three of us! We've spent a fair share on activities, too. We've browsed all the gift shops, but bought very little. The prices are ridiculous. We're hoping that we'll find gifts to bring home for less when we get out of tourist central.

Speaking of tourists, the majority of people at the places we've visited so far are Asian. According to our farm tour guide at The Agrodome, they are seeing 29 tours/day from Korea, China and Japan and 5/day from other countries.

Now, what have we been up to? Our flight was easy. TSA was a breeze. The plane was huge and comfy, flight attendants nice, food delicious. The Hobbit safety video was played. You can watch it here: An Unexpected Briefing We had our own monitors with dozens of choices of movies, TV shows and documentaries to watch. I watched a National Geographic show about underwater vents and then The Fellowship of the Ring.

Once on the ground, baggage claim, immigration & customs were a breeze. We picked up our rental car right outside the door and headed south. We drove through many patches of rain, some quite heavy. We made a stop along the way for lunch and to withdraw some money from our NZ bank account and arrived at our farmstay mid-afternoon.

Our hostess, Maureen, is bubbly and friendly. We have a comfortable sleeping room and a bright sitting room. We do not have internet access. We look out on one side toward the cattle pasture and on the other side we have a spectacular view of Lake Rotorua and Mokoia Island below us. After a cup of coffee and short visit with Maureen, The Alien settled in for a nap while Treklet and I went to the Polynesian Spa for a soak in the thermal pools. Later that evening we went to dinner in town on Eat Street and I was able to get some wifi for about half an hour.

Saturday morning Maureen started us out with a carbo-loaded breakfast, then we were on our way to The Agrodome. Treklet got to bottle feed a lamb on stage, and received a handful of freshly-shorn wool from the sheep show. The farm tour included sheep and alpaca feeding, as well as manuka honey, kiwi juice and kiwi wine tasting. I don't think wine grape growers have anything to worry about. I did not purchase any kiwi wine.

We rode the Skyline cable cars to a nice buffet with a great view of the lake. After our feasting Treklet and I went on the Luge. It was great fun! Three tracks were open, and we did them all--a scenic, slower track meandered through the redwoods, a faster and shorter intermediate route, and the shortest, steepest advanced track, on which Treklet humorously crashed. The temperature warmed up quite a bit in the afternoon, and I was regretting wearing the black jeans on the way back up the chairlift. Treklet got a bit pink on her shoulders.

Rotorua's first winery, Volcanic Mountain, just opened a tasting room at Skyline. Of course I had to try a bit after browsing the gift shop. I can't say that any of their wines had much body to them, but we purchased a bottle each of the Rose and Pinot Gris to take to Christmas dinner because I thought that these were wines that even a non-wine drinker could enjoy.

We stopped in town to do a little more shopping and ate our evening meal at cafe that was attached to a little motel. The food and service were excellent, but again, quite pricey.

When we arrived back at the farm, Maureen had a great surprise for Treklet! Her granddaughter, Emma, agreed to take Treklet for a ride on her horse, Podge! Treklet was elated. She fed and groomed Podge, then climbed upon the Australian saddle and was led around the paddock and old wool shed for over an hour. We unsaddled old Podge just as the sun set. After a quick shower, Treklet went out like a light with a big smile on her face.

Sunday morning, another starch-filled breakfast, then a full morning at Te Puia learning about Maori culture and the geothermal activity of the region.

There is barely anyplace to get wifi here. I'm sitting in a McDonald's just to use wifi, but it's not very good. I can't download my email. I'm going to wrap this up. I don't know when I'll get back on, but I miss my Tweeps!
Haere rā 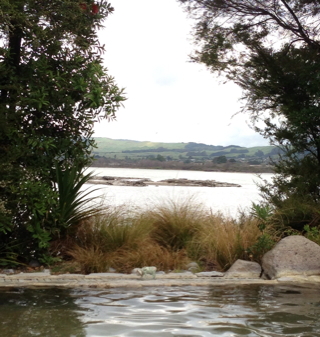 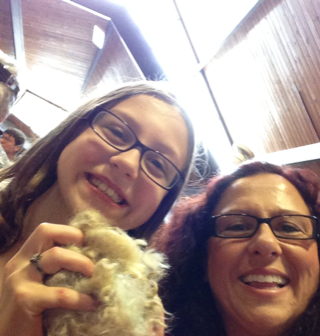 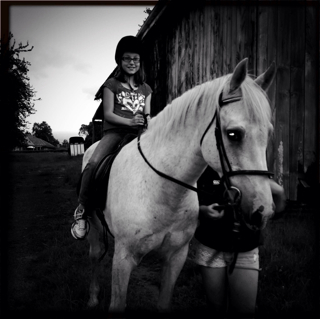 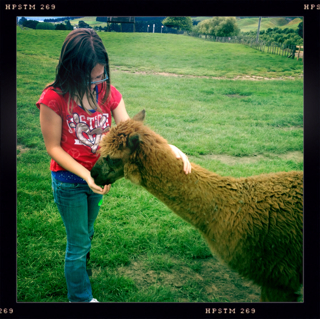 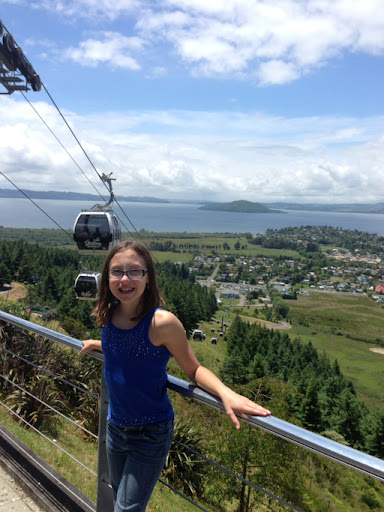 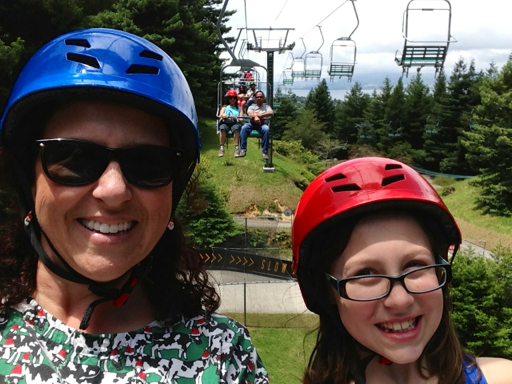 Addendum: MacDonalds wifi sucks! Lol. We found a Starbucks. You get 50 MB or 30 min free wifi with purchase. So here am I trying to upload again.

Again, let me just say I'm SHOCKED at prices. A single greeting card at the book store NZ$6-12. Almost got a Starbucks NZ travel mug for a friend but they're NZ$25! I've got to make our funds last 2-1/2 more weeks. Jeez

Posted by starfleetmom at 5:12 PM