May dad died 36 years ago today. I was 14. It took 5 years for cancer to finally win. Frankly, I mostly remember him as a man we went to visit at the VA Hospital. I remember the phone ringing in the middle of the night. I knew it was the hospital. I knew it meant he died. Then I heard mom cry.

This is a poem I wrote soon after his passing:


NICE GUYS FINISH LAST
My daddy was tough
My daddy was kind
He was the kind of man
You very rarely find
He had such reason
To moan and complain
He never did
Even when in great pain
He always wanted
Me to have the best
He never wanted me
To be like all the rest
He was a proud man
He held his head high
Never put others down
Oh God, Why did he die?
We watched him suffer
Five long, drawn-out years
We sure watched him, all right
Through the saltywet tears
The one time he cried
Was on his dying bed
The last time I saw him
Five days ‘til he was dead
He is gone now
We can’t revive what’s past
Now mommy cries a lot
‘Cause nice guys finish last

I can't say that this any great art, but I was a kid, and I was hurting. I have used poetry at many times of hurting in my life. I've never really shared most of my writings.
My dad was an orphan; his mother died in childbirth with his youngest brother and his father "died of a broken heart" shortly after that. His mom was German and his dad was Irish. His three sisters were old enough to find work, he and his two younger brothers went to a German Catholic orphanage. The middle brother, Chuck, died when I was a kid. I vaguely remember him as a very obese man that was buried in a double wide casket. The youngest of the brothers, my Uncle John, remained a devout Catholic his whole life. He is a Deacon, and a former National President of St Vincent De Paul Society. He is 84 now, and in frail health. I last saw him eleven years ago. All of the sisters are long gone.
My dad, Robert,  was born August 9, 1918. He died April 25, 1975. He was only 56 years old.  He was a Marine in WWII. He was on a bridge in Okinawa that was blown up by Kamikazes. His pelvis was crushed and he had several discs in his spine fused. He last worked as a tool and dye maker for Boise Cascade. I wish I could tell you more, but that's all I know.
Here's a picture of my dad in the Marines. I think he looked like John Wayne. 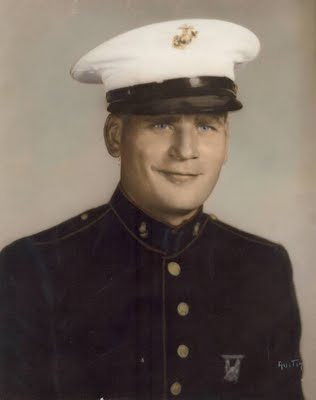 Posted by starfleetmom at 10:01 PM