It's my birthday week, so I'm using some of the dining freebies to celebrate.

Yesterday my friend Irene was in town from San Antonio so I met her and her daughter, Nina for lunch at Red Robin. Here's a lesson on how to be an ass: I got a free burger, free bottomless fries, free water, and a free sundae and song. I was bragging to my hubby about not paying a cent for lunch and he said, "You left a tip, though, right?" Silence. As a former waitress I felt like a total jerk. I'm going to have to stop by next time I'm at the mall and look for that server. Irene got a bill and paid it, and left a tip, but it didn't even occur to me to tip him on the value of my delicious meal. Doh!

Today I went to see the surgeon that operated on my foot and ankle 4 months ago. I was concerned about some pain & swelling in my ankle lately. I got a lesson on some strengthening/stretching exercises to do with a theraband and we decided if at the 6 month point I am not better I'll get a new MRI. On the way home I stopped at Roadrunn 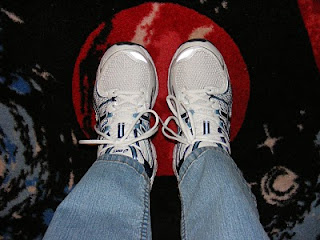 er for new shoes. I also decided to spring for the custom inserts that they sell after a "Shoe Dog" analysis of your feet. My orthotics are not right anymore, and the inserts are way cheaper anyway, even at around $75.

Well, I had my feet measured, analyzed by computers and videos and got my inserts. I was presented with 4 pairs of shoes to try on. It was really not hard to choose...Asics won my vote. My shoe size went up AGAIN and I'm now in an 11. Yep, between the size and the scars I officially have Frankenfeet.

My lesson for today is: Always ask for a discount. I mean, the worst that can happen is there is none, right? My bill was over $200! Yikes! I'm so frugal, but when it comes to my feet, I'm stuck. I just can't wear Payless shoes. So I asked the cashier in a jocular way to give me any discounts available, including the Senior Citizen discount. Of course she said I wasn't old enough, but I told her my hubby will be 75 next week and her response was the usual, "How old are you?!" I told her I'll be 49 on Friday and she said, "Happy Birthday," then, "I can only give you 10%." (that's the normal VIP discount I already get with their membership). I thanked her politely. Then out of the blue she said, "I gave you 20% off." Woohoo! I got $38.95 knocked off the bill, just for asking, and pointing out my birthday.

After that I had planned to go to Costco, but it was nearing lunchtime and my big belly was grumbling. I decided to shop the San Marcos Costco, instead of Carmel Mountain, which was on the way, so I could redeem my free noodle bowl certificate from Noodles and Company. What a nice surprise I got there! I gave the cashier my certificate, which basically said a free bowl of noodles. Well, that sounded sparse. I chose the Japanese Pan Noodles, which had veggies in them. I was really hungry so I added beef, which the menu said added $2. I was prepared to pay for it. I also ordered a small fountain drink. My total was $1.46. I got the added protein free, too. Woot! It was a yummy dish, a little sweet, a bit spicy, and very satisfying.

I had a big Costco bill, but I'm well stocked on high quality meat, organic milk and produce and I got new swim suits for the girls and myself for our upcoming Hawaii vacation. I packaged up the meat in freezer bags and tomorrow I will freeze most of the onions (it's a huge bag, but only .47/lb). I'll slice some and chop some and put 1/2 cup portions in baggies, then put all the baggies in a large freezer bag. It will not only save me some money, but save prep time...and I'll only cry once! (thanks for that lesson, moneysavingmom.com!)
Posted by starfleetmom at 9:13 PM