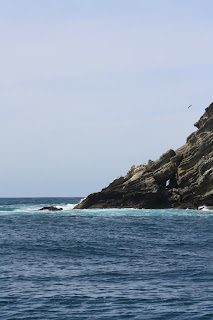 The girls and I spent my birthday on a boat! I'm not a big fan of boats. I have a seasickness issue. But I must say I love whales just a little more than I hate boats, so I got a prescription for scopolamine and half-price tickets on Goldstar and we went!

We boarded the smallish boat,The Bright and Morning Star, at 10 a.m. The slow cruise through the harbor and past Point Loma was nice. The captain pointed out lots of local landmarks, military history and current practices. Once past the Point, we the sea became more dynamic. The swells seemed huge to me, but in reality it was a pretty calm.

On the long cruise to the Islas Los Coronados the captain talked nonstop, but it was interesting. He taught us all about the pirates that operated out of the islands in the mid-1800s, attacking the Gold Rush shipments to England and France, and the rum-runners of the 1920s. Finally we learned about the current practices.

Three Mexican families live on South Coronado Island, which is owned by the Mexican Government. They fish and dive for urchin, which is sold overseas. the government keeps most of the money and pays the fishermen a pitiful salary. We saw a small boat offshore with 2 men in it and one diver underwater. They use no air tanks, but a long air hose which the diver tokes on like a hookah.

An Australian Company runs a bluefin tuna business, leasing the sea area from Mexico. They capture young tuna and keep them in pens just offshore of South Coronado until they reach about 150 pounds. Then they kill them and send them by air to Japan where they are eaten raw. They are the most expensive fish in the world. I thought it was really weird. We also heard about how one of the pens broke and bluefin were washing ashore in San Diego in late January.

Once we got close to the islands we were treated to many harbor seals and California sea lions. There are many nesting birds, including California Brown Pelicans (12,000 nest here!) Western Gulls, Brown Boobies, Black Oystercatchers, Neotropic, Brandt's and Double-crested Cormorants, and more. We saw one northern elephant seal. Evidently the El Nino this year is delaying their migration somehow. This is one of only two elephant seal colonies within 300 miles.

I was pretty nervous at some points along the southern sides of the islands. The captain brought the boat very close to the sheer cliffs and rocky edges. The churning water was a beautiful turquoise, and we got great pictures of the wildlife, but in the back of my mind I kept wondering if a large swell could smash us against the rocks...what if the motor died?! We survived, though, obviously.

We headed around the western side of the islands and into open sea. Several small fishing boats were on a school of yellowtail, and the birds and common dolphins were also enjoying the mackerel that the tuna were chasing.

We spotted a humpback whale, which breached clean out of the water! We enjoyed it's fin-slapping antics for a while, then followed it for a bit as it frollicked in the water. We spotted migrating gray whales in the distance, but they were pretty far out, and we were already running late, so we did not approach them.

The ride back to the harbor seemed even longer, especially since Treklet had a tummy ache and was quite miserable. I don't think she was seasick...I forgot to give her her reflux medicine before we left. She napped a little bit and woke up feeling fine.

There was a TV & DVD player in the cabin and the mate put on Star Trek for us!

We saw a Navy Submarine on it's way out of the harbor heading west. We watched as it submerged. Very cool. We passed an aircraft carrier running drills with some Coast Guard and Naval Security boats.

We pulled up to the dock at 4:50, happily disembarked and tipped our crew of two. We saw everything we hoped to see, and learned quite a bit of history (and I didn't puke!) It was a good birthday.

Katie took all the pics. You can see them here.
Posted by starfleetmom at 10:47 AM