I Know, I've Neglected My Blog!

I've been SERIOUSLY busy with shuttling the husband and kid and trying to get Christmas stuff done. Treklet is in another play, and I'm on stage crew. It's been crazy. Here's my frazzled attempt to catch you up:

The good news is, THE ALIEN GOT HIS LICENSE TODAY!! Woo hoo! He has an ignition lock thingy on his car, and a restricted license for work, so I will have my days back! YIPPEEE! YAHOOO! BAZINGA!!!

I'm not ready to sit back and pop bonbons just yet, though. Treklet will have her "Holiday Concert" at school tonight (missing her final dress rehearsal!) and then bright and early tomorrow morning we will be at the theater for two school performances of Annie. Treklet is the Dogcatcher, as well as an Orphan. We open for the public tomorrow night, followed by two shows on Saturday and a Sunday matinee.

But wait! There's more! Sunday night we are going to the Bethlehem Walk with our BFFs. A local church transforms their outdoor property into Bethlehem and people are escorted through the town in small groups. It's living history! There are mean Roman soldiers, potters, weavers, samplings of olives and bread, a temple, and more. The tour culminates with an overcrowded inn, and finally a stable with a real live Holy Family.

Monday morning The Alien will DRIVE HIMSELF TO WORK, I'll shuttle the carpool to school, then get my teeth cleaned at the dentist, drive to La Jolla to the ankle doctor for the Dead Guy, and be back in time to get Treklet from school and take her to the karate studio for her JUNIOR BLACK BELT TEST.

Speaking of karate, we found out yesterday that Treklet's awesome instructor is being laid off from the studio. I cried real tears. He's been a great influence on her, and she respects and loves him. I appreciate his influence in her life. Treklet has not only learned Taekwando from him, but many other life lessons and positive character attributes. She prayed for him last night, even in her exhausted state, that he will find a new job. Although she likes the Master who will take over her classes, she says Mr. Philip is more fun and doesn't want him to go. She's been with him for almost three years!

I am waaaaay behind in Christmas preparations. The house is decorated (a humongous undertaking) and we have a tree (purchased through a school fundraiser), and I even have all the kids' presents wrapped! However, I am in need of some gifts that need to be mailed and I need teacher gifts by next Thursday! I totally dropped the ball with the Girl Scout leaders. I will have no time to shop until next midweek. I am usually done in November! I also have $30 credit at Shutterfly, so I need to find enough time to produce some sort of card and Christmas letter and get those in the mail for our relatives in the UK, NZ and the Midwest. I think the overseas kids may receive their Christmas checks by New Years. Let's just blame the snail that carries the mail, shall we?

I hope to be all caught up by the end of the week so that Treklet and I can enjoy Christmas break. I have a stack of Groupons I've been saving. We can go to The Museum of Man, Belmont Park, and Legoland Aquarium with them. I also hope to make a trip up to Hollyweird for Universal Studios before our passes expire on the 31st. Maybe we can meet up with some friends up there, too. 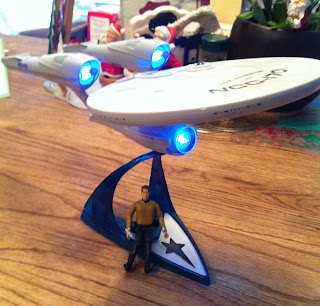 Finally, I leave you with some Merry Trekmas. My dear friend since high school, who now lives far, far away in Colorado, sent me a present already. Of course I opened it! This awesome, non-trekkie gal sent me a STARSHIP! It's not every day that you get a starship in the mail! It's the USS Enterprise from the latest movie. We shall call it the Alterprise, since it's from the alternate timeline. ;-)  I seriously doubt that Kirk is gonna fit on the bridge, though.
Posted by Unknown at 1:50 PM