Wednesday night, Treklet had an accident on stage at final dress rehearsal for The Little Mermaid. Evidently her heel got caught on a step and she twisted her ankle and fell from one platform to another.  I got the call at 8:10 p.m. to come to the theater. "It looks bad," are the words I remember.

My husband and I arrived to see our crying child in a wheelchair with an icepack on her ankle. The theater security staff provided them for her and some of the stage moms helped her change out of her costume and gathered her things. One of the moms is a physician, and when I gave permission, she examined the injured limb. Her opinion that there was a possible fracture and an x-ray was indicated.

Because we've been similar situations with both daughters before, I knew that if I took her to the local hospital and there was any indication of a break or a torn ligament, etc., we would be sent to Children's Hospital for Orthopedic care. Because of the growth plates in the bones, most regular Orthopedic doctors send kids and teens to Childrens to the Pediatric Orthopedic specialists. We decided to go straight to Rady Children's Hospital to cut out the "middle man," since the first performance was the following morning and we needed answers ASAP.

We arrived at the Emergency Room entrance at 9:05 p.m. to find no valet, and no wheelchairs. It's a good thing I had my husband come along to drive! I went inside to see a completely full waiting room and a makeshift secondary triage area behind some screens. Oy vey! It was going to be a long night. I asked the security guard at the desk where I could find a wheelchair and he wandered off to find one.

Once I got her inside, we queued up at the registration window. We gave her name, and the briefest description of her injury, and were told to have a seat. Ninety minutes later we were finally called by a triage nurse! She weighed Treklet and took her vitals and asked her how she became injured. The nurse put in an order for an x-ray and sent us back to the waiting room.

The x-ray technician called us in after about 10 minutes. The Alien went in with her for the pictures and when they emerged from the lead-lined room Treklet was in tears. The positioning for the films caused her a lot of pain.  We were taken to an exam room and told to wait.

The exam room was the size of a closet, with a child-sized gurney, a sink, a wall-mounted computer screen, a flat screen TV and two chairs in it. Once the wheelchair entered the room, there was barely room for someone to stand alongside it. The heavy door with a viewing window in the center of it closed behind us and there we sat. And sat. And sat some more. By midnight, I the Alien was dozing and Treklet's head was bobbing. I went into the hallway and flagged down a rushing nurse and asked for a blanket for my child. I covered her in the thin fabric and turned off the TV and the lights and she slipped into a light sleep.

At 1:00 a.m. I felt like all the useable air in the room had  been exhausted and I opened the door and leant against it and closed my eyes. Sleeping standing up is for horses, not moms. This room was like a prison cell, except at least prisoners get toilets. Finally, my husband wandered the halls in search of a staff member and asked if our daughter would be seen soon. She was a clerical employee and looked quite confused but offered to find a nurse for us.

Four and half hours after our arrival a doctor finally showed up. We woke our sleeping patient and she offered her painful extremity to him. By this time it was swollen to elephantine proportions. I pointed out to the physician that when we arrived it was not that big, but no one had provided an ice pack, or even so much as a tylenol for her pain. He apologized, and said that was unacceptable. We had an ice pack within minutes.

The doctor examined the ankle. He thought there was something on the x-ray that could be a small fracture, and at the corresponding place on the exam there was pain. He was not confident in his diagnosis, though, and there was no radiologist available to read the films. A splint was ordered, and we were instructed to make a follow-up appointment for 5-7 days at the Orthopedic Department at Childrens. We were told that a radiologist would read the films and call us in the morning with a definitive diagnosis.

The ice pack nurse returned to apply the splint. After molding and wrapping the quick-set plaster splint, she informed us that a set of crutches had been ordered from central supply. About 20 minutes later she returned with them and told us to wait for discharge papers.

Once Treklet stood up on the crutches I noticed that the splint was all wrong. I told my husband that there was no way we were leaving with that mess on her leg and he needed to go get the nurse.  He returned with the doctor, who took one look at the poorly formed immobilization device and apologized.  The foot was at a 45 degree angle (not 90 as intended) and the plaster and elastic wrap stuck out at least 4 inches in front of the foot. She couldn't even keep it off the floor when using the crutches! So we spent an additional 30 minutes waiting for two other nurses to come in and make a proper splint.

It was shortly after 3:00 a.m. when we finally left for home. We were in bed at 4:00 and I woke up at 7:00. My first thought was checking in with the director, and then I couldn't get back to sleep. Next I called for the Orthopedic appointment, as instructed. I was told there was nothing available until April 29th. I said that the ER doctor wanted her seen Monday or Tuesday and the receptionist's reply was, "I am aware of the script they give you at the ER but can't do that." I reluctantly took the appointment, which wasn't even with a doctor, but a Nurse Practitioner.  A little while later, she called me back and said there was a cancellation for Monday, with another Nurse Practitioner, but we would have to drive to San Diego as the local office was booked. Better than nothing, I supposed. Also, upon reviewing the discharge papers I noticed that they never updated her medication list and several drugs were listed on there. She takes no medication whatsoever. So much for accuracy.

Treklet slept until 10:00 and after feeding her we headed to the theater. The cast was all so warm and welcoming to her. She was happy to be reunited with them, and there was one empty seat in the balcony for her to watch the second show. The alternate casting worked well and audience seemed to enjoy the show. Afterward, she got in costume from the waist up and was included in the official cast photo.

I still hadn't heard from Radiology by 2:00 p.m. when we left the theater so I called. The ensuing aggravation was compounded by my lack of sleep and the uncertainty of whether she would be able to try bearing weight on the foot for the Friday performances. I was told, "We don't give results to parents." WHAT?! I am her mom, her legal guardian, and the one paying for that x-ray! The woman on the phone told me they would fax the report to our pediatrician and we could get the results from her. I asked, "since we are seeing an ortho on Monday, so shouldn't they send the report there?" Nope,  call your pediatrician. ugh.

When I called the pediatrician's office I got voicemail. I left a message. After 20 minutes I called again and got a human who told me that our doctor wasn't in and that there was no report faxed to them. Why was I not surprised? I was also told that the ER gave us the wrong protocol. They should have had us follow up with the pediatrician, and if orthopedic consult was required they would  make the appointment. Yeah, everyone wants their piece of the action.

I told the receptionist that I didn't care who looked at the report, but I need to know if my child had a broken bone or not. I exaggerated just a little when I said a cast of 70 plus the crew and director all were waiting to find out if my daughter would be able to go onstage tomorrow in her lead role!

I told her it was ridiculous that the radiology department couldn't tell me fracture or no fracture when they were supposed to call me to begin with. I was given some legal babble about privacy laws and how they couldn't know it was actually me on the phone. My reply to that was that they could simply hang up and call the number listed on the patient chart!

I implored her to help me out by calling the hospital for the x-ray report, but she said she had to wait for a doctor to come out of an exam room to ask permission. ::head desk::

Finally, 19 hours after arriving at the ER, I got a call from the pediatrician's office. There is no fracture. They could not recommend any weight bearing until the ortho follow up. I said OK thanks, bye!

This morning we removed the splint. There is very minimal swelling--you have to look hard and compare ankles to see it. There is no discoloration. I put her in my Borg boot and cinched it up and she was able to walk on it, and even practiced her blocking. We're gonna do this.  She will continue to use the crutches, but for the show, she will wear the boot and be Flotsam! She will sit out the three shows that she is the ensemble, since she can't dance, but she will be able to be an eel. Yay!

We will follow up at ortho on Monday, and hopefully there is no serious ligament issues. My non-professional, mom-with-multiple-ankle-issues opinion is that it is a moderate sprain.

The whole experience was made so much worse by the ridiculous medical-legal system. Inaccurate medication list, no ice pack, ridiculous wait, a botched splint, no radiologist, no follow up, & hassle getting the report. These are all insults to her injury...and to my intelligence and parental rights.  I can't wait to get that patient satisfaction survey! 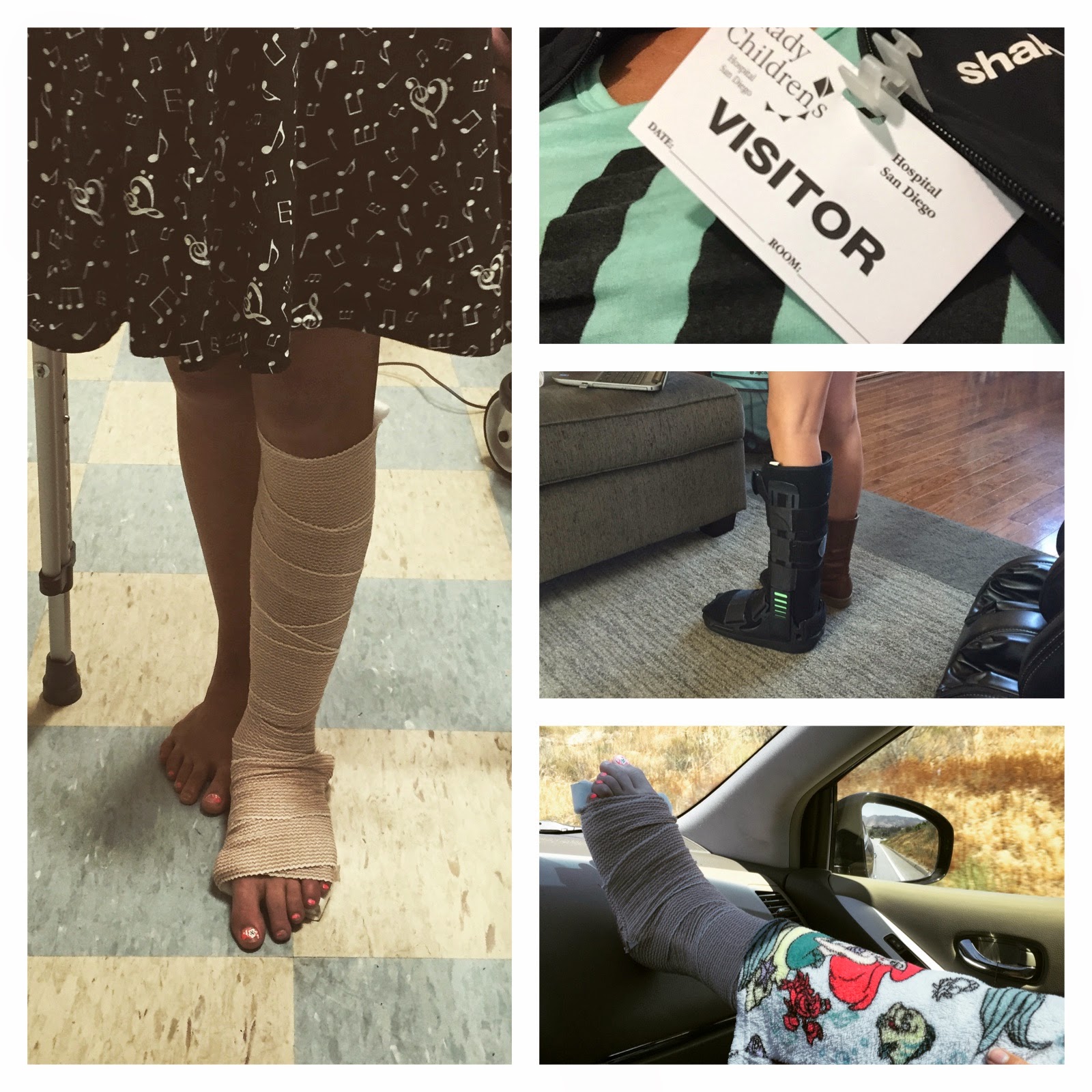 Posted by starfleetmom at 11:39 AM