I just watched Rebecca of Sunnybrook Farm. The closing number with Shirley Temple and "Bojangles" (Bill Robinson) was so wonderful.  Then I got to thinking: That movie was made in 1938. Do you think Bill was allowed to eat with the cast/crew? Did he have a separate dressing room? Was it as nice as Randolph Scotts? Did he have to enter the studio lot through a different entrance? How come his character has such a lame name (Aloysius)?
He was an amazing talent. I don't usually notice color, but when you watch old movies like that you can't help but notice...Black people are always servants. Well, at least they got to be in the movies...Native Americans were played by Caucasians wearing red makeup! Yes, we've come a long way...but there's still a long way to go until skin color doesn't matter. There are still a lot of bigots in this world...bigots of all colors..and that is a pox on humanity. 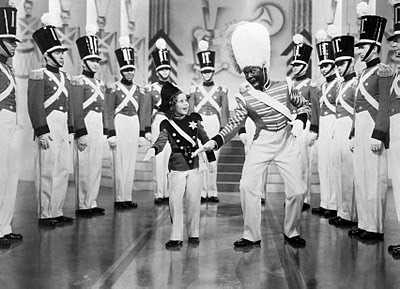 Posted by starfleetmom at 6:08 PM