Warning! NSFD (Not Safe For Dieting)

By popular demand, here is the incredible recipe I talked about on Twitter today.
I got the October issue of Family Circle for FREE and just look at the cover!

Here is the recipe, as found in the magazine:

3) Whisk in flour until smooth. In a thin stream, whisk in milk. Stir in onion flakes, salt and pepper. Bring to a boil over med-high heat, then reduce heat and simmer 2 minutes. In large bowl, toss together cheddar, colby-jack and mozzarella.

5) In pasa pot, combine cooked pasta and cheese sauce. Pour half into prepared dish. Sprinkle with a generous cup of the bacon-cheese mixture. Repeat layering.

6) Bake at 350 for 20 minutes. Broil for 3 minutes until top is lightly browned. Cool slightly before serving.

Now I made some necessary changes in order to use the ingredients I had on hand. Being a bacon freak, the first change I made was to use twice as much bacon. I have no idea what cavatappi is when it's at home, so I used medium shells. I don't have onion flakes either, so I just used pepper and seasoned salt.

The cheese was another modification. I had some shredded medium cheddar in the freezer, some Italian blend shredded cheese, and some orange and white shredded blend, no longer in it's original package, but I assumed it was cheddar & Jack or a Mexican blend.  I just mixed it all up. Tasted fine to me!

I baked it in a stoneware casserole dish and it came out looking quite pretty. 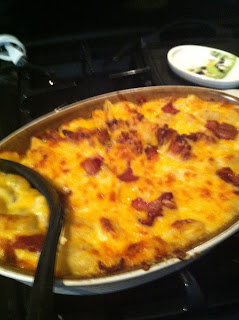 Most importantly, it earned the Treklet Seal of Approval. 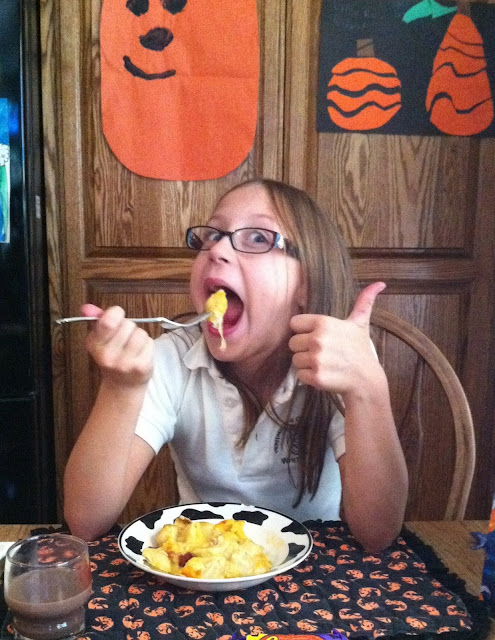 Posted by starfleetmom at 1:58 PM